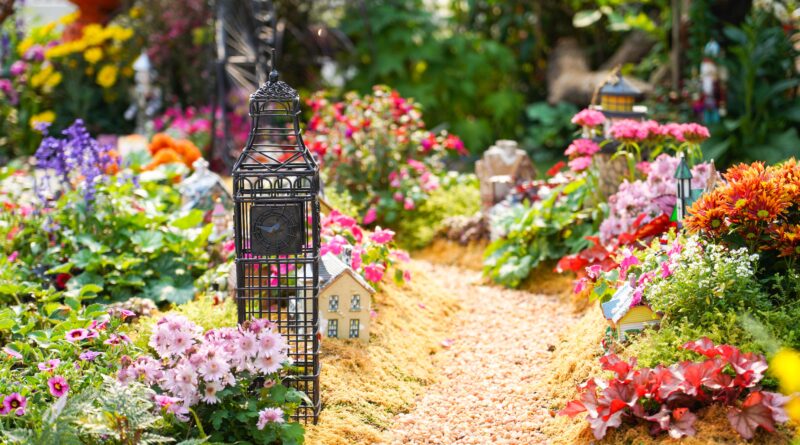 Garden design is the systematic organization of living and inanimate items with the goal of achieving a pleasant result. Making a garden necessitates the application of creative instinct and imagination. Everyone enjoys walking through a well-kept designed garden.

The coloration of many plant parts, such as flowers, fruit, foliage, stems, and bark, varies greatly. The colours of natural flowers, fruits, and leaves are, without a doubt, the most appealing. Each colour has a variety of hues in various intensities. The most common and necessary colour is green, which comes in a variety of tones and grades. Green is a colour that is everywhere, attractive to the eye and relaxing to the mind.

Warm colours are red, orange, and yellow, while cool colours are blue, purple, and green. Another perception is that warm colours appear to move closer to the observer while cool colours appear to fade into the background. When the spectrum’s pure colors—red, blue, and yellow—are tinted towards neutral grey, they appear closer to the viewer. As a result, these perceptual feelings connected with various colours add life to a landscape and produce an advance or recession impression.

Texture refers to the aesthetic effect of tactile surface quality in design. Plant components such as leaves, stems, and bark have a variety of textures; some are smooth, soft, and delicate, such as flower petals, while others are rough, hard, and inflexible, such as acacia tree bark. Plant materials and species with contrasting textures can be arranged to create a visual impact of contrast. As a result, textural differences between plants should be one of the factors to consider when selecting species for a landscape.

When discussing the look of plants, the phrases form and habit are frequently used. The direction of growth can be represented as habit, and the shape of a three-dimensional object can be described as form. The habit element of trees is usually the most dominant, whereas the form aspect of shrubs is the most significant. Other visual attributes such as colour should be considered while deciding on the visual compatibility of plants with specific habits. There is a kind of psychotherapy that use plants. Designers and plant therapists believe that specific mixtures of things with diverse forms and habits might induce stress, rest, or balance effects.

The eye is guided from one section of a design to the next by line, which defines shape and structure and can elicit emotional responses. As a result, straight and curved lines are frequently blended in designs. In designing, triangles, rectangles, circles, and variations of these and other geometric forms are used.

The arrangement of objects along a vertical axis is referred to as balance. Balance denotes a state of equilibrium, which might be actual or fictitious. The balance and symmetry are achieved by matching the species and placements of plants on each side of a prominent focal point, such as a building. Balance is evident in the formal landscapes in front of the Taj Mahal in Agra and Jehangir’s Tomb in Lahore. Balance in informal design is achieved through the intelligent use of colour, texture, and form, rather than by exact matching of species and positions of plants on each side of an axis.

The occurrence of an object, sound, or event at regular intervals of space or time is referred to as rhythm. The heartbeat, a drum beat, or the repeating of a motif in a design are all instances of rhythm. It would be the recurrence of a plant, tree, or flower bed at equal intervals in a garden in the context of landscape planning.

In a garden, there is generally some special object to be focused on and highlighted, just as there is in a painting. This aspect of design is accomplished by strategically placing dominating plants or other objects that draw attention to the design. Accents can be created with a huge tree, colourful plants or flowers, or amenities such as a pool or deck.

Harmony is achieved when all of the components in a design work together to provide a pleasing effect, and it is dependent on excellent scale and plant material combinations. The landscape designer should strive for overall design unity as well as coherence among the many aspects and elements.

Plant selection and plantation designs have evolved over time in response to changing lifestyles. Plant selection and planting designs are influenced by the people’s cultural customs and background, as well as their differing conceptions of beauty. Gardening can be divided into two types: FORMAL and INFORMAL. Both the style and the origin can be traced back to antiquity.

This type of gardening, also known as Muslim gardening, is widely used in the Middle East and Indo-Pakistan. This is a really straightforward and easy style. On both sides of a specified axis, it is based on geometric symmetry. The differences in illumination between day and night, as well as between areas of shadow and light, are considered. To mitigate the unfavorable effects of the climate, trees are grown to provide a maximum of shade. The dry air and high temperatures of summer need the installation of water reservoirs, humidification via fountains and waterfalls, and effective irrigation systems.

The recurrence of one species at regular intervals is employed by plants to demarcate and accentuate formal patterns. Cypress avenues are commonly used to draw emphasis to a view beyond the garden or to highlight a certain element inside it. Another feature of this garden design is topiary work.

Japanese garden design is a term used to describe the informal style of gardening. It’s a naturalistic design in which balance and harmony are accomplished using curved, non-geometric lines that don’t repeat themselves and a variety of artistic techniques, rather than symmetrical planning. The visual impact of one plant is weighed against that of another. The differences between the forms of the various plants, as well as the habit or line effects, are given a lot of thought. Seasonal effects of intense visual contrast that last only a few weeks are particularly desirable. Spring and fall impacts are achieved by planting trees and ground plants. Mounds, streams, and vegetation are used to create mountain and river landscapes.

Landscape architecture is a design discipline that focuses on integrating man-made structures with their natural settings. It is focused with the functional and aesthetically pleasing arrangement of space for utility and beauty, using both natural and structural elements to combine man, building, and place. It is essentially a fine art whose primary goal is to produce and preserve beauty in the places where people live and work, as well as to improve the comfort, convenience, and health of city dwellers.

The rock gardening is a type of landscape horticulture in which attractive plants are grown in rocky locations that resemble natural formations. Rock gardens come in a variety of styles, including walI, naturalistic, moraine, scree, and alpine meadow gardens. Plants are planted in a wall garden, which is made of flat rocks without the use of cement or mortar. The boulders are arranged in horizontal levels, with joints and holes alternated. Plants are inserted into the holes, which are filled with suitable soil.

The wall is constructed against a backward-sloping terrace. A naturalistic rock garden is designed to resemble a natural mountain setting. A moraine garden is modelled after an alpine location that is irrigated by melting snow. A scree garden is similar to a moraine garden, except that it is watered by sprinkling. 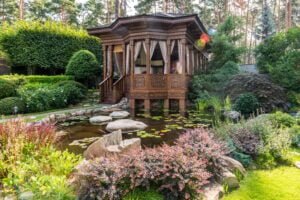 Growing decorative plants in natural or artificial ponds and pools is a part of landscape horticulture. Water gardens provide a cooling and refreshing effect on the environment in addition to its visual value. Hoeing, irrigation, and weeding are not necessary in this form of gardening.

The ponds or pools are set in open areas away from trees, ideally at the foot of a rock garden, as a lawn feature, or in a paved courtyard. At least four hours of sunlight should be provided to the pool. In and around such gardens, plants including lotus, water lily, umbrella plant, calla lily, watercress, tradescantia, and ferns thrive. 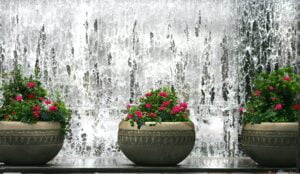