Production Technology of onion in Sub-Continent

Onion is produced in subcontinent on large scale. Production of onion commercially in Pakistan over an area of 131.4 thousand hectares, yielding 1.8 million tonnes. The onion (Allium cepa L.) is a member of the Amaryllidaceae family. Here is the production technology of onion.

The onion is native to Afghanistan, Tajikistan, and Uzbekistan, as well as the western Tien Shan and India. Western Asia and the Mediterranean Sea region are secondary development hotspots. Throughout history, onions have been cultivated and consumed as a meal. They’re eaten both while they’re young and when they’re fully grown. They are commonly referred to as “poor man’s food” since they are used by both rich and poor people.

The onion is a versatile vegetable that may be used in soups, meat dishes, salads, and sandwiches, as well as cooked alone as a vegetable. The presence of a volatile oil gives it pungency (allyl propyl disulphide). Starch, carbohydrates, protein, and vitamins A, B, and C can all be found in mature bulbs. Here is the complete production technology of onion.

Onions are a cool-season vegetable. The length of the day has an impact on onions, and the daylength requirements of different types may differ. As a result, only acclimatised types should be planted. In most commercial types grown in Pakistan, a somewhat high temperature and a long photoperiod are required for bulb production. However, temperature is more significant than daylength in the growth of seed stalks.

Onions can be grown in almost any soil, although they thrive in fertile, humus-rich, well-drained soils. Onions are acid-sensitive and produce their highest yield over a relatively small range of soil reactivity; the optimum pH ranges from 5.8 to 6.5.

Fertilizer requirements vary depending on soil type, previous fertilizer application, crop purpose, and a variety of other considerations. A 30 tones onion output is said to remove 15 kg of nitrogen, 42 kg of phosphorus, and 130 kg of potassium. Several weeks before planting, apply FYM at a rate of 40-50 t/ha. It is advised that NPK fertilizer be applied at a rate of 120-60-60 kg/ha. After about a month, top-dress with half of the N; the remaining fertilizer can be applied at the time of transplanting. Because K is abundant in Pakistani soils, the dose of this element can be safely reduced.

Onion seedlings are placed to ridges spaced 60 cm apart. Seedlings are planted at a distance of 10-15 cm between piants on both sides of the ridges. According to Khushk et al. (1990), spacing of 20 cm between rows and 10 cm between plants resulted in good yields. According to Mangrio and Baloch (1985), a plant population of 50-62 plants/m2 tends to yield the highest yield. According to Mangrio and Bozdar (1985), as plant density grows, the number of onion bulbs increases, but the verticill and horizontal dimensions, as well as the weight of each bulb, decreases.

The seed rate is determined by the reason for planting as well as the distance between rows. Seed is seeded at a rate of 8-10 kg/ha in the nursery. About 25kg/ha of seed is used for direct sowing, and the plants are trimmed to a reasonable spacing when they are 6-8 weeks old. Around 1000-1200 kg/ha is required when bulbs are seeded. They are spaced 15 cm apart in 45 cm rows.

Irrigation must be done at the right time. When selecting when to irrigate and how much water to use, consider the soil, including surface and subsurface, present weather conditions, and the crop’s age. Before transplanting, a seedbed is typically watered. The soil’s moisture content should be kept as high as possible. Following a dry season, irrigation may cause the outer scales to split. In such cases, the farmer must make a decision based on the crop’s condition. If it has grown to a marketable size, it should be harvested; however, if it is not yet ready to sell, irrigation is an option. When the tops develop and begin to fall, irrigation is turned off.

Planting time varies depending on where you live, the sort of onion you’re planting, and how you’re propagating it. Seedlings are cultivated between June and September for early planting and transplanted between July and October. Seeds for the winter crop are sown in Pakistan’s plains from the middle of October until the end of November. When the seedlings reach the age of 8-10 weeks, they are replanted in December and early January. Seeds for spring onions are planted early. From March through June, the seeds are planted in the hills.

Green bunch onions or mature ripe bulbs are the two types of onions that can be harvested. Green bunch onions are harvested when they have produced a little bulb and are about the size of a lead pencil. The form and colour of a well-matured ripe bulb are indicative of the varietal. While the leaves are still green, the tops of the leaves droop just above the bulb, indicating maturity. If the soil is not hard or compact, mature bulbs can be readily pulled out by hand; otherwise, they must be dug out with a shovel.

A 25-30 t/ha production of onion has been recorded. 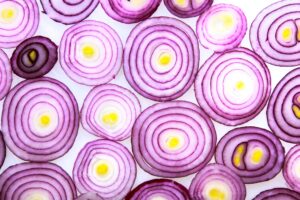 This is all about the production technology of onion.

10 thoughts on “Production Technology of Onion”