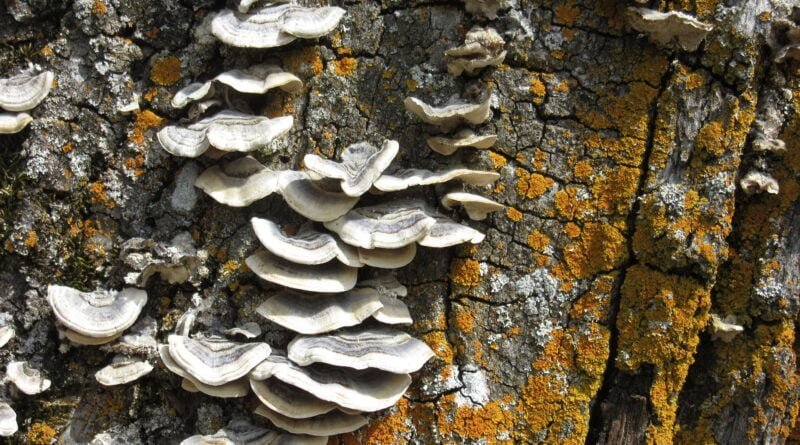 Vegetables
August 24, 2022 Expert Mushrooms that Grow on Trees
Spread the Love by sharing

The group of living organisms known as fungi is incredibly diverse and feeds by dissecting other organisms. Some kinds of fungi consume living trees by growing on their bark. The majority of mushrooms that grow on trees are actually polypores, or bracket fungus, and they will continue to grow there until the tree dies. Some bracket fungi can be consumed or have therapeutic uses. Given that many varieties of mushrooms that grow on trees in your backyard can be deadly, it is usually advisable to get them identified by a professional before eating.

Which species of mushrooms that grow on trees?

The most well-known gilled mushrooms belong to the Basidiomycota phylum of fungi, which is one of the largest. The majority of basidiomycete species of fungus that develop on tree bark are polypores. Polypores lack the usual mushroom fruiting body, which includes a stalk, cap, and gills (where spores are produced and dispersed). This is in contrast to many basidiomycetes. Instead, polypores develop a fruiting body called a conk that protrudes from a tree’s trunk and resembles a shelf (thus the term “shelf fungus”). The conk’s underside includes holes where the spores are found. 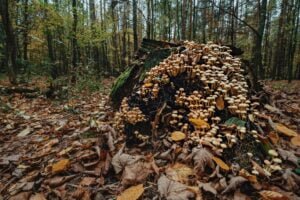 Despite the fact that the majority of polypores, also known as bracket fungus, are quite woody and inedible, there are a few edible mushrooms that grow on trees bark. If properly identified and harvested at the right time, they can create a really good supper.

Tree-growing fungi that are edible

A recognized polypore known as the sulphur shelf, sometimes known as chicken-of-the-woods, is believed to taste like chicken! Laetiporus sulphureus, often known as chicken-of-the-woods, is easily recognized by its eye-catching orange colour, enormous fruiting body size, and wavy margins. If you see the Laetiporus edible type growing on conifers, do not consume it. It only grows on oak trees. Fruiting bodies can grow up to 12 inches long individually and up to 24 inches long and 50 pounds in weight in clusters. The most palatable portion of the mushroom is the sensitive, young growth around the margins; older examples may upset the stomach.

The chaga mushroom, Inonotus obliquus, commonly referred to as the clinker polypore, is another well-known species of fungus that develops on tree bark. This polypore appears to be a crinkly, cracked, blackish mass developing on the bark of birch trees rather than a shelf at all. While not always edible, chaga mushrooms can be processed into a powder that is reported to have amazing antioxidant properties. Chaga mushrooms, however, may negatively interact with a number of illnesses and drugs.

Many other kind of mushrooms that grow on trees are used medicinally but shouldn’t be consumed. These can typically be dried, processed into a powder, and then added to smoothies or tea. Artist’s conk (Ganoderma applanatum), birch polypore (Piptoporus betulinus), turkey tail (Trametes versicolor), and reishi mushroom (Ganoderma tsugae) are a few examples of these varieties of mushrooms that grow on trees.

One delicacy that some claim tastes exactly like its name is the oyster mushroom, which is a genuine mushroom and not a shelf fungus. Pleurotus ostreatus is a species of fungus that is noteworthy since it does grow on tree bark, preferring beech, oak, and other broadleaf trees. Although oyster mushrooms are now a speciality item in grocery stores, mushroom hunters can still find them in the field in the fall or early winter when they are at their best.

Do polypores cause tree death?

It can already be too late to salvage a tree if you see any form of polypore sprouting on a tree in your backyard. Only after the bracket fungus has significantly harmed the interior of the tree will its fruiting body start to show. The majority of tree fungus species favour shady environments and will develop on the tree’s north side. Additionally, polypores favour coastal environments that are humid, cold, and rainy.

Two different types of rot that polypores bring on will both ultimately kill a tree. Some bracket fungi induce white rot, in which the fungus consumes the tree’s lignin and discards the white cellulose. It may take these fungi three to five years to kill the tree because of their slow growth. Artist’s conk, reishi, and chaga are a few types of polypores that induce white rot.

Brown rot is the other type of rot brought on by bracket fungi. Brown rot causes the wooden components of the tree to dry up and crumble, which accelerates the tree’s demise. The beefsteak polypore, sulphur shelf, and banded polypore are a few examples of polypores that lead to brown rot.

Why do fungi cling to trees?

Growing mushrooms on trees is a sign that your tree is ailing and has become infested with a fungus that causes rot. Enzymes accelerate the disintegration and destruction of the tree once a fungus has colonised the entire interior. The fungus has already taken root inside the tree’s interior structure at this time. 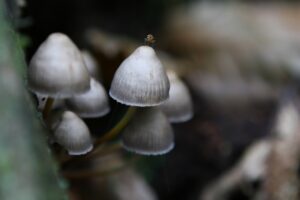 What should be done about trees with mushrooms?

Leave any mushrooms that grow on trees on your property. Getting rid of them can encourage the spores to land on nearby trees. It is advised to call an arborist if you see mushrooms growing on your trees. They can assist in correctly evaluating the tree and choosing the best line of action.

One thought on “Mushrooms that Grow on Trees”