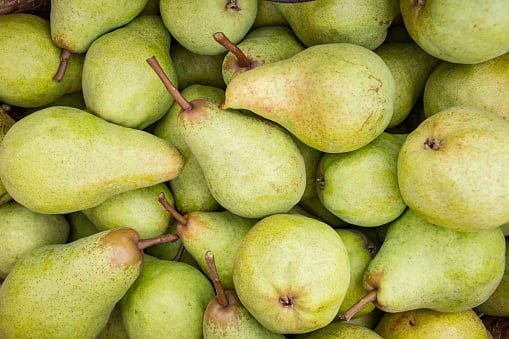 What exactly is a European pear? The cultivated European pear (Pyrus communis) is most likely a hybrid of two wild pear subspecies, Pyrus pyraster and Pyrus caucasica. Wild pears may have been harvested and consumed as early as the Bronze Age, but the ancient Greeks and Romans did write about pear grafting and cultivation. Our main objective is to explain the types of European pear. 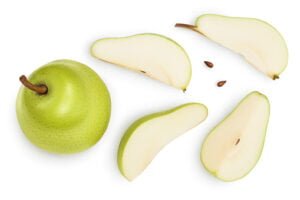 Pears were carried to the New World by pioneers and later migrated to the Pacific Northwest in the 1800s. Over 90% of all European pears grown now are located in this region, particularly in the Hood River Valley of Oregon and into California.

European pears are deciduous trees. There are many types of European pear. They thrive in damp soil with full to partial sun exposure and can grow to be 40 feet tall (12 meters). They have serrated, simple, alternating, oval-shaped, dark green leaves. The bark of a young tree is grey/brown and smooth, but as it ages, it becomes grooved and flaking.

The tree blooms in the spring with white to whitish-pink five-petaled blooms. Fruit matures in the fall and can range in colour from green to brown, depending on the cultivar.

When planting any type of European pear, consider the size of your garden before selecting a cultivar. Keep in mind that they can grow to be 40 feet (12 meters) tall. In addition, dwarf and semi-dwarf varieties are available.

When you’ve decided on a pear tree, dig a hole that’s somewhat broader and deeper than the tree’s root ball. Compost the soil in the hole. Remove the tree from its container and place it in the same depth as the hole. Backfill the hole with the amended dirt after the roots have been spread out. Make sure to thoroughly water the new tree. Here is the list of different types of European pear.

How to grow a plum tree from a seed?

There are different types of European pear but here we will explain the top best cultivars. 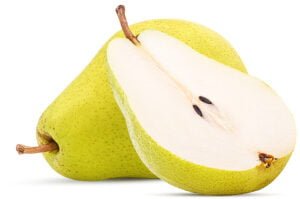 Let’s discuss all types of European pear one by one.

It is a French pear variety that dates back to 1830 and comes from Boulogne. The skin is rough and golden, with considerable russeting. The flesh is pink-tinged in hue and buttery in texture, with traces of flowers and rose water in the flavour.

These pears are typically eaten fresh or in desserts, but Beurré Hardy can also be used in pig dishes or on a cheese board with nuts and blue cheese. They are accessible from the fall to the early winter.

Beurre Bosc is an Apremont pear variety that dates back to the early 1800s. The pear is distinguished by its tall, tapering neck and a long stem. The white flesh is crisp and aromatic, with sweet and spicy aromas.

Because of its solid flesh, Beurré Bosc keeps its shape nicely when baked or poached. These pears have a season that lasts from October through April. Surprisingly, Beurré Bosc is frequently utilized in paintings, photography, and drawings due to its shape and warm colour.

Doyenne du Comice is a pear variety from Angers; France, where it was initially planted in the 1840s. The pear is plump and stubby, with slight skin russeting. The flesh is creamy-pink, luscious, and melting, with a somewhat peppery flavour.

It is also regarded as the best-flavoured dessert pear, and it is frequently served fresh as a dessert on its own. Because the skin is thin and easily bruised, these pears are handled carefully and not mechanically wrapped.

Rouen-born Passe Crassane is a French pear variety. The pear has russeted, greenish-yellow skin and is medium to large in size. The skin is thin and silky, and the meat is slightly gritty and grainy while remaining tender and delicious. Aromatic, fruity, sweet-tart and flowery aromas characterize the flavours.

Passe Crassane is open from late winter to early spring. Pears are frequently baked, poached, and roasted. Raw, it can be sliced and eaten as a snack, or it can be used in salads and cheeseboards. It complements ginger, hazelnuts, lemon, almonds, garlic, smoked salmon, chocolate and onions.

Pera de Lleia pears are cultivated, gathered, and packaged in the Llano de Lleida region of the province of Lleida. They are distinct because of their sweet flavour, spherical form, and distinctive colour. They have white flesh and are pale to bright yellow in colour.

Pera de Lleida has a gentle flavour and aroma and is very juicy and delicious. They have a remarkable sugar-to-acid ratio, which leads to a sweeter perception of their flavour. All stages of cultivation and production must take place inside a geographical location that has optimum weather and soil conditions for the development of this specific variety.

Peras de Rincon de Soto are Blanquilla and Conference pears are grown in the Ebro valley. These pears are larger, longer, sweeter, harder, and have greener skin than those grown in other regions.

They are hand-picked with care, leaving the stems intact, and processed and packaged within 6 hours of picking. Peras de Rincón de Soto are highly sweet with no acidity, crisp and succulent, and fragrant with subtle fruity and floral scents.

Belle Angevine is a rare pear variety that dates back to the 17th century. Because the pears are so enormous and heavy, they frequently fall off the trees before being picked. They have green skin that turns yellow and eventually red when they are ready to be harvested.

This Pyrus communis cultivar, sometimes known as Rocha, is native to the Portuguese towns of Leiria, Santarém, and Lisbon. According to folklore, the Pera Rocha was discovered in the village of Obidos, north of Lisbon, by farmer Pedro Antonio Rocha.

Rocha discovered an excellent pear tree and traded grafts with his neighbours and friends, resulting in the quick spread of the cultivar throughout the region. Pears are gathered from August to late September, and the fruit is picked by hand as well as mechanically.

Williams is a native European pear that was discovered in Aldermaston, England, in 1765 by a schoolmaster named Mr. Stair, but it was afterwards acquired by a nurseryman named Williams and introduced to the rest of the country, hence the name.

The same pear is known as the Bartlett in the United States. Pears range in size from medium to giant, with thin skin that turns from green to golden yellow as it ripens. When fully ripe, the flesh is fine-grained, smooth, and juicy in texture, with a fragrant, tangy, buttery and sweet flavour.

Anjou pear originated in Belgium or France in the mid-nineteenth century. The pears range in size from medium to large and have an egg-shaped look. The skin is yellow to mild to bright green in colour. The meat is aromatic and soft in texture, with a sweet and juicy flavour.

Anjou is a versatile pear that can be served raw, poached, baked, roasted, or grilled. The meat is thick and can withstand greater temperatures. These are the best types of European pear.

One thought on “Top 10 Best Types Of European Pear”