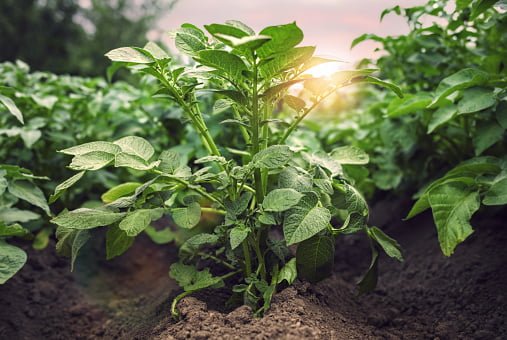 Potatoes are the subject of many myths and stories, although most of them are incorrect. It’s a terrific plant to have around, and if you live somewhere where you can successfully grow it, you’ll be able to reap the benefits.

There is, however, one thing to keep in mind when it comes to potato plants and their leaves: they are very deadly.

Can you eat potato leaves?

The answer to that question is emphatically NO! Because they are toxic, potatoes’ leaves should never be eaten by humans. The leaves and stems of potato plants are considerably different from those of other plants you could cultivate in your yard. 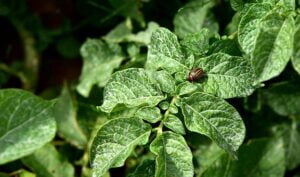 Due to their Solanaceae ancestry, potato plants and leaves cannot be eaten. The term “nightshades” is widely used to describe these plants. Popular garden plants like tomatoes, peppers, and eggplant are examples of nightshade vegetables.

Steroidal alkaloids are found in this family of plants. Solanine and chaconine, two potentially toxic glycoalkaloids, are found in potatoes. Solanine is found in the leaves and stems of many other members of the family, such as tomatoes. Solanine toxicity affects both humans and livestock. Fortunately, animals are usually smart enough not to eat potato plants!

Potato leaves may be toxic, however, this is not always the case since the quantity of solanine in the plant and the growth circumstances may vary widely. Sprouts and other green portions should be removed before cooking to prevent food poisoning.
Before cooking, it’s vital to remove the skin and eyes to prevent the accumulation of the poison. Don’t use a potato with a green spot or one that’s overly mushy.

White potatoes vs. Sweet potatoes: Which is better?

White potatoes and sweet potatoes are two distinct foods. As a matter of fact, both belong to the nightshade and morning glory families. Sweet potatoes have orange flesh, while the flesh of white potatoes is white. Although they are both cultivated underground, the minerals and health benefits they provide are very different.

In addition to being delicious, the leaves of the sweet potato plant are loaded with nutrients. Even more so, they are a source of antioxidants and include a wide range of vitamins A, C, and B. In the same way that spinach and other leafy greens may be eaten raw or cooked, so can these.

There are vines that grow above ground with huge leaves that resemble spinach leaves in the sweet potato family. The mildly bitter leaves taste like chard or mustard greens and are good for you.

You may consume sweet potato leaves raw or cooked in the same way you would other green vegetables such as spinach, kale or lettuce. Because the leaves are bitter when eaten raw, most people choose to boil them instead.
Sweet potato leaves have the following health benefits:

Sweet potato leaves are a rich source of antioxidants that can help protect the body from oxidative stress and cell damage caused by free radicals. Antioxidants have been shown to both prevent and treat cancer, according to research.

Fiber, protein, calcium, and numerous other nutrients are found in the leaves of the sweet potato. The high levels of antioxidants and Vitamin C in sweet potato leaves have been shown to reduce the risk of certain types of cancer, according to research.

Which potato leaves are safe for consumption is subject to change based on the variety being discussed. Smoothies, salads, and stir-fries all taste great when made with sweet potato leaves. People in underdeveloped countries, such as the Pacific Islands, Asia, and Africa, often consume the leaves of sweet potato plants because of their high nutritional value. There are numerous areas in the globe where sweet potato leaves are referred to as “camel tops.”

Sweet potato leaves are mostly unknown to the general public in the West. In addition to being delicious and nutritious, quinoa may be used as a replacement for potatoes and other high-calorie foods. Toxic leaves of Irish potatoes should not be eaten.